The first time I saw the Black-eyed Snakes, I thought the frontman was having some sort of epileptic fit. He was thrashing around violently and screaming sounds that didn’t seem human, let alone lyrical. He looked and sounded like John Lee Hooker being electrocuted. Meanwhile, Smokin’ Brad Nelson and Big House Bobby Olson backed him up on guitar and drums with a demeanor that suggested they weren’t playing music, but butchering pigs. The whole sound seemed to reach into my chest and drag out my soul like a vine. This wasn’t a show, this was voodoo. 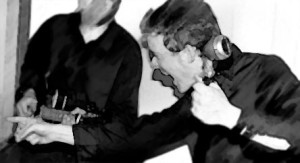 And I wasn’t the only affected one. The room had the atmosphere of a back-alley Rottweiler fight. We all felt like something lowdown and sordid was going on, as if the vice squad might crash in at any moment and haul us away. And on some level-the Minnesotan, Midwestern, Scandinavian level that makes us remain stoic, objective, and restrained-we believed that wouldn’t be such a bad thing. Obviously, this much fun couldn’t be good for us.

Later, like an addict, I would return to show after show, a nd learn that this maniacal persona calls himself “Chicken Bone George.” I also learned that when the spirit enters him, it has terrifying results, causing him to somersault off a drum kit and land flat on his back, to fall recklessly onto the floor and flip around, or even, godhelpus, cover Moby.

Since then, word of the group has spread. The threesome was voted “Minnesota’s Best New Band” by City Pages in Minneapolis and the reader’s choice for the same honor in Duluth’s Ripsaw. The band continues to pack hot, smoky rooms with freaked-out fans, and the icy Minnesota restraint seems to be melting just a touch. The Black-eyed Snakes are on to our dirty little secret. They know we’re hungry for a let-out, for the real deal, the greasy meal, the knife in the back, so to speak. And they’re going to give it to us, whether we like it our not.